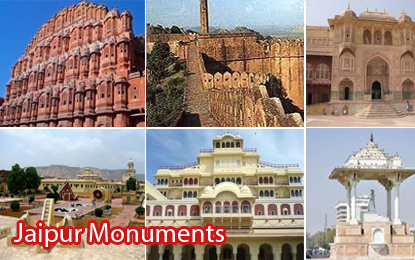 The culturally rich heritage capital city of Rajasthan, Jaipur was founded in 1727 AD by Maharaja Jai Singh II. It has turned into one of the most popular tourist destination in India owing its rich historical back ground. The various architectural marvels of ancient forts and monuments in the city are the main sources of attraction. It is named as the Pink City because of the extensive use of pink color on the walls when Prince Wales came to visit the place.

The city has a rich number of beautiful monuments and forts each with a story of its own. Their roots are found on the pages of history. Monuments like Jaigarh Fort, Amer Fort, City Palace, Nahargarh Fort, Gaitore, Hawa Mahal, Jantar Mantar, Jal Mahal, Rambagh Palace and Statue Circle are flooded with tourists all throughout the year. The Nahargarh Fort, Jaigarh Fort and Amer Fort are the eye candy of the city. The Gaitore on the other hand is a shrine dedicated to the Maharajas of Jaipur. It is famous for the exquisite carvings. The City Palace situated in the heart of Jaipur is another major attraction spot. The Statue Circle was built to pay tribute to Maharaja Jai Singh II who came up with this beautiful city of love. Tourists get mesmerized with what the city has to offer. One time visit is never enough for Jaipur!

The aesthetic Amer Fort is situated in Amber, 11 kilometers from Jaipur. Amer was the former capital of Rajasthan before Jaipur took over. The fort popularly known the Amer Palace as was built in 1592 by Raja Man Singh.

Do not miss the ‘Palace Of The Winds’, Hawa Mahal if you are in Jaipur. It is one of the prominent tourist attractions in the city. Located right in the heart of Jaipur it was constructed in 1799 by Maharaja Sawai Pratap Singh from the Kachhwaha Rajput dynasty.

The City Palace is the exact spot from where the Maharajas used to rein the subordinates. The centrally located palace includes the famous ‘Chandra Mahal’ and ‘Mubarak Mahal’ and some other buildings. They once formed a part of the palace complex in the past.

The Jaigarh Fort is a regal monopoly built by Sawan Jai Singh II in Jaipur. It is a palatial structure perched on the ‘Cheel ka teela’ hills that is effectively connected to the Amer Fort with a subterranean passage.

Jantar Mantar is one of the largest observatories in the world, humankind has ever built. It is a perfect combination of religion, science and art. Jantar Mantar is a series of five magnificent structures built in Jaipur, New Delhi, Ujjan, Varanasi and Mathura.

The state of Rajasthan was formed by the union of many princely states. Rajasthan that houses a number of forts and palaces were mainly ruled by the Rajputs, hence its rich royal heritage.

Gaitore is a royal cremation ground for the Kachhwaha Rajput kings and the members of the royal family and forms one of the major tourists’ attractions in Jaipur. ‘Gaitore’ is derived from the Hindi phrase, ‘Gaye ka Thor’ meaning ‘resting place of the departed souls’.

The famous Statue Circle is located right at the heart of the busy traffic junction of Jaipur. This centrally placed interest is passed by almost half of the city’s population every day. Of the number of interesting tourist spots in the city, the Statue circle is another attraction added to the list. 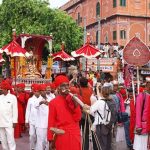 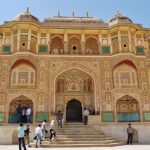